Here's the results of testing EICAR (inside a simple txt file) in different file formats using VirusTotal. In order of most detected to least. Most of the ones where they were not detected were inside Office files. Interestingly, Malwarebytes fails on a least 7 of the compressed file formats. A recent AV-Test.org result indicates a similar lack of protection.

How good/bad is Vodafone Secure Net?

All Vodafone contracts come with 3 months of free Vodafone Secure Net, which is advertised as blocking malicious websites and files. If you don't cancel it, you're charged £1 extra per month. Vodafone have 444 million customers worldwide, so they could be earning up to nearly 1% of revenue through it.

It can be managed through the app or via the website. 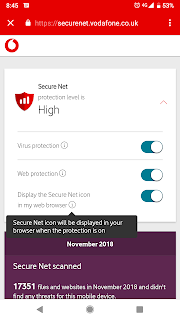 Test 1: EICAR in a text file hosted on a website
Secure Net successfully blocked this one and displayed me a message saying so. You also get a text message confirming this. 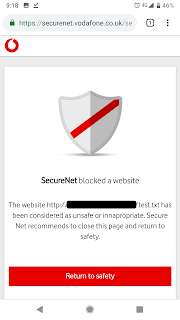 Test 2: EICAR in a zip file hosted on a website
Secure Net failed to block it this time. However a standard mobile antivirus was able to block it. The link it was coming from was from Kaspersky. 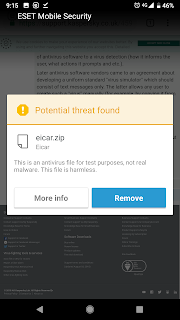 Test 3: A genuine trojan dated from 2010 contained in zip file hosted on a website
Secure Net failed to block this file.
I then uploaded it to VirusTotal to test it to see if most antiviruses would detect it - 47 of 59 got it. Surprisingly, a popular one - Symantec - did not detect anything wrong. 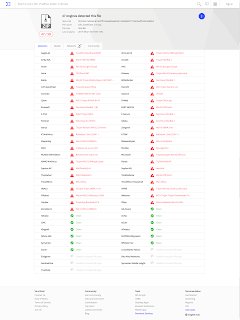 So overall, Secure Net is good at blocking EICAR, even over HTTPS. It's clearly scanning in real-time as well as the EICAR file was brand new on my site. However, it didn't detect the trojan, even though the majority of antiviruses did.

Conclusion
Secure Net isn't worth it, and is essentially a scam and complete waste of money. Having an actual mobile antivirus, and keeping your phone up-to-date with operating system and app updates, is more likely to protect you. Some examples:
- Android: ESET or AVG
- iOS: Norton or Avast
- 1.1.1.1 with WARP VPN

Today, 36 million people live with HIV and nearly 1 million die every year die because of AIDS, so it’s important to raise awareness of it, support people with it, and remember the 35 million who’ve died from it. The PARTNER study announced this year tested 100,000 people taking ART to achieve an undetectable viral load, and there were zero cases of transmission – this means HIV may no longer mean a death sentence, and it can be stopped from spreading to others, so could be stopped once and for all. In spite of that, there is still heavy stigma surrounding it.

You can get 100 free ribbons from World AIDS Day if you agree to paying £15 from donations.

I don't have HIV, but there is still stigma around it. I've made this to try and explain the key points about it and AIDS.

As I wasn't taught this in school, and this isn't something provided through the news, I've had to research and understand this all myself, as I was stigmatised of HIV as well.

HIV is still a problem, as it kills nearly a million people every year. The best treatment is for everyone sexually active and negative to take PrEP, and positive people to take ART and strictly adhere to the daily treatment. The sooner the treatment is taken after transmission, the more likely the treatment will work.

To prevent further transmission, it is important to check with all sexual partners on their HIV status and if they are positive, whether they are adhering to taking ART and regularly being tested to ensure an undetectable viral load. Using condoms also prevents other STIs so are recommended.

The ultimate goal is still to eradicate HIV. Abstaining from sex would resolve this, however this is very hard to prevent. The next best option is to educate people, provide protection, and reduce the chance of transmission as much as possible. Even with all this, the treatment does not work in rare cases, and like any virus, it may become resistant. It's possible bacteriophages may able to cure it one day.. It's important to remain vigilant, continue research and to keep it under control.

The wider public need to be informed of the stigma and also how to be safe.