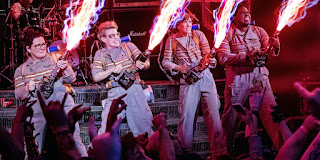 As there are so many questions I'm led to believe there will be a sequel.

There is no afterlife, heaven or hell. There is no reincarnation. These are all things we have dreamt up to make us hopeful and protect us from the truth: that once we die, we are never conscious again. There is no such thing as a soul.

The reason behind this is obvious if you look at nature. What makes us so different from monkeys, from cats and dogs, and from the smallest little creatures? Why do humans get the privilege of an afterlife when other creatures do not? At what point did evolution give us this 'soul' and this ability to ascend to a different plane of existence?

From all this the truth is very clear: it is something we made up. We made up the idea of afterlife so that religion could be used as a way to control people, and cover up the fact that science is real. The argument between religion and science all started with religion wanting to cover up the facts that science brought with it, and throughout history has dismissed the ideas of many scientists and killed them.

This idea is instantly depressing. The thought that when we die we won't exist anymore. We won't be able to think, feel or do anything - we will cease to be. We shut our eyes and that is the end of our story. It's scary and deeply harrowing. But it doesn't mean that life is pointless.

The resolution to this existentialism is to "do what we can". Your life is a gift - it is a chance to change something in this world. To make the world better. So that when you die, you can feel happy, knowing that you've left this world in an improved state than when you found it. Every single person that is born is another gift - another chance to change this world and make it better - to create your legacy. Whether that means to have children, to make someone else happy, to save the lives of others, to provide to others, and to push humanity in some direction that it will be better in the future.

Think about what you are passionate about, what makes you tick, and what you think needs to be fixed in the world - what is that thing that makes you think "Someone really needs to fix this". My lasting thought in life would to be in bed at the end of my life, surrounded by family, friends and loved ones, looking back at everything good I've done in this world and being happy that I made this world a better place. I have influenced the world and changed it to a different path than it previously would have been had I done nothing through my entire life and just "existed".

From this comes a philosophy of how to live your life as well - to never cause suffering. Try and make the lives of others better - don't hurt others, or anger them or upset them. Show them patience, care, kindness and tolerance and find how to move forward.

Origin of the universe

There is another concept that religion imposes - the idea of a god, or many gods. Knowing that each of us is made from stars, and that after all the stars have burned out in 100 trillion years, and the universe slowing cooling until the heat death of the universe, it does make you think, why does the universe exist? Is there a way to escape the universe? Can we live beyond it? Is there a way for humans to keep surviving, after the Earth is gone, and after the last of all the suns has gone out, to keep living for trillions and trillions years more, or is there even a way to escape the universe?

These are the thoughts that should drive us forward. If you strongly believe in god, then the pursuit of science and wanting to discover how the universe came about, kind of dissipates. To focus on something like a god is to distract yourself from trying to answer the real questions about the universe. To settle on a belief is giving up and avoiding answering the question. There shouldn't be a belief, instead, there should be a desire to want to know.

WALL-E is about sacrifice

WALL-E isn't a movie just about robots or love or the environment. It isn't even about Disney or that little sweet butterfly that gets in you every time you watch a Pixar classic. It's about sacrificing our humanity.

Buy N Large (BnL) became a popular company at the expense of business competition. This allowed them to commercialize every facet of organisation. Media, transport, government, health, education, science, sport, technology: everything except environmental responsibility. We sacrificed economic and cultural freedom for the sake of convenience. We got rid of political and business borders and made a new frontier, but put up borders against nature and a wall of silence.against the depletion of resources, physical space and waste management.

The second sacrifice was nature. Pollution and lack of recycling or renewable energy usage ruined the climate. For the sake of excessive and immediate consumption: a mindset of only thinking what you need now, and not ever considering the future.

Then we sacrificed the Earth. Humanity literally packed up its bags and ran away from its home. We gave up the entire planet - its history, culture, races, resources, and nature itself - because it was easier to leave than to fix the problem.

Then, we sacrificed our intelligence: humanity ceased growing, inventing, or creating. It just existed.

Then we sacrificed our bodies, because of laziness, given floating chairs. We stopped working, given robots. We stopped exploring our surroundings and questioning anything of our existence because of the digital world on a screen in front of us. We even stopped meeting in person.

This resulted in the ultimate sacrifice: our humanity. This is why WALL-E is so powerful as a character, because, even though he's a robot who has developed artificial intelligence, sentience, and a conscience, he's the only character left who is still human. Not just in his personality but in all the things he does and collects too. He is the only character who really understands how important humanity is and why it's worth saving, via the plant and his love for EVE, before any other characters cared or bothered to fight for it.

WALL-E isn't just a family friendly digital romance action adventure science fiction space opera trying to warn us of environmental responsibility, it's a definition of humanity and its relationship with the whole universe. It's about using technology not for convenience, but to enrich us. It's about making our place on this little planet worthwhile and enjoyable to the maximum we can afford. Technology should be used to connect us as an entire species and give us the platform to pursue our humanity in ways never before possible. It's not meant to be used so that we can just live in a chair for our entire lives - there is a good Oatmeal (or similar) comic that depicts this.

Only by using technology sustainably, to manifest our dreams, can we retain our humanity, rather than sacrifice it.

Response to 'The EU is undemocratic'

Being in the EU is fundamental. Leaving is like running away from your problems. If you don't like the way the EU is run, we have the power to change it if we get involved and vote for it. I trust the EU more than my own government.